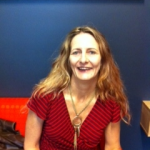 This morning Steve Austin’s program on ABC 612 featured an piece about the tenant advice services and the offer from the Commonwealth to fund them.  Click here to listen  to Housing Minister Mander trying to explain why it is a good idea not to take $2.5M to help Queensland  battlers and the Tenants’ Union of Queensland’s response to that.

* The Tenant Advice and Advocacy Service Program (TAAS) was discontinued last October by the State government. Funding to all 23 community based services was withdrawn despite the money being generated from the interest on tenants bond money, rather than tax payer dollars.|
*   The Commonwealth government provided emergency funding for TAAS services across Queensland from November 1 to June 30 this year.
*   The Commonwealth have insisted on the State funding tenant advice and advocacy services as a part of the National Partnership Agreement on Homelessness which will provide funding for homelessness services.
*   The State has not announced what it will do.  However, after many months of stating that TAAS services are valuable but they can’t  afford them, it has started to say that tenants’ needs can be covered by the statutory body, the Residential Tenancies Authority (RTA), and other community services such as community legal services.
*   The RTA has not and cannot provide the same services as tenant advice services namely:

*   Community legal centres have made strong statements that they cannot pick up the load
*   The Commonwealth have now offered the State another $2.5 million to fund tenant services for 6 months as long as the State funds them after that
*   The State is indicating that nothing has changed and they do not want to fund tenant services –http://www.brisbanetimes.com.au/queensland/tenant-service-in-deep-water-despite-life-raft-20130522-2k13o.html

Help will be harder to get for CQ renters come July

HELP for Rocky’s battlers could get harder if funding of their rental advocacy group is stopped in June.

“The federal funding kept the service going but that expires on June 30.”

An average of 180 people a month sought help from the tenancy service last year, most of them from the Rockhampton Regional Council area, and a small number from the Central Highlands and Central West areas. END_OF_DOCUMENT_TOKEN_TO_BE_REPLACED

Mr JUDGE: My question is to the Minister for Housing and Public Works regarding the imminent loss of the Tenant Advice and Advocacy Service. Does the minister foresee any adverse consequences associated with the Newman government’s decision to cease funding to this service in terms of increasing the risk of homelessness and placing additional pressure on the already strained public housing system? If so, what plans are being put in place to address these critical issues?

Mr MANDER: I thank the honourable member for his question. Last year, this government had to make some very tough decisions because of the debt that we inherited from the previous government. One of those tough decisions was to stop funding for the TAAS services that were operating throughout this state. But we did it for other reasons as well. Advocacy and advice to tenants is offered through a whole range of different avenues. Of course, the greatest way it is offered is through the Residential Tenancies Authority—the RTA—and also through other community organisations. Just last week I heard a quote from the Salvation Army in Townsville, which talked about the fact that quite a few non-government organisations supply advocacy for people to get into housing and that `as far as advocacy groups go, it doesn’t seem to be a shortage problem in Townsville’. I am hearing stories like that right across the state.

A review a couple of years ago by the previous government of the TAAS services brought out a couple of very relevant points. When we look at their performance report produced by the department, we see that 60 per cent of the core service outcomes were reported as unresolved, or unknown. A further 27 per cent were reported as info only. This is a gold plated service where 27 per cent of its business is duplicating the role of the RTA. In fact, the same report reveals that three quarters of TAAS services are provided over the phone and in writing, not face to face.

This government believes that those services are important, but they are being offered at the moment in ways that are far more cost effective. We are not into wasting money. We want to use that money for—and this pun is intentional—concrete solutions. We will put roofs over people’s heads with the money that we will save through that money that currently goes to TAAS services. I am looking forward to announcing some of those new arrangements in the next few weeks, which will show very practical solutions to helping the 20,000 people in Queensland at the moment who regard themselves as homeless.

Unlike the opposition, which is very good at scaremongering—going out and frightening the living daylights out of people rather than providing practical solutions—we will not fall into that trap. I am looking forward to talking about those solutions and helping those people put a roof over their heads, which is everybody’s right in this state.

The Tenants Union of Queensland says the closure of a statewide advisory service will create more demand for public housing.

The State Government discontinued funding last year and interim funding from the Commonwealth is about to run out.

Tenants Union coordinator Penny Carr says the service has been operating in 23 different locations and helps people stay in the private rental market.

“We’re worried that this does create more demand for social housing and it puts people at risk of homelessness,” she said.

“Our services are keeping people housed.

“The vast majority of tenants, probably just under 90 per cent of the renting households, are renting in the private rental market. END_OF_DOCUMENT_TOKEN_TO_BE_REPLACED

Today the Tenants’ Union of Queensland (TUQ) confirmed that they will not be funded by the state government to represent the interests of tenants in the current review of tenancy law.  This means there is no specialist tenant advocate supported to participate in the review.

The TUQ report that a door has been left open by the government for future negotiations, one which they say they will eagerly pursue.  However, the decision by the State, means there is no longer any of the millions of dollars worth of interest generated on tenants’ bonds provided for specialist tenant services in Queensland.  Read the TUQ press release here.

As the Queensland Housing Minister looks increasingly like introducing tougher ‘anti-social’ behaviour restrictions, we look at a critique of these laws from Western Australia where the Minister says he is basing his policy.

For the record, in Queensland tenants – public or private – can already be taken to the Tribunal by the lessor seeking a termination of the agreement on the basis of objectional behaviour.  In deciding whether to terminate the agreement, the tenancy tribunal would consider what evidence was available.

Why should this quite vulnerable group of public housing tenants have additional expectations and requirements placed on them?

Governments around Australia are moving towards the national (rather than state/territory based) regulation of community housing providers.  The system is supposed to be in place by July 2013 and the second round of consultations is happening over the next few weeks.  The Queensland government are looking at potentially large stock transfers from public to community housing, emphasising the importance of these consultations.  It’s definitely not everyone’s cup of tea, but if you’re interested, click here to find out where the consultations are. 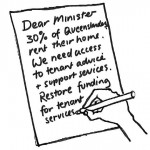 Please give me some real answers or re establish a tenant advice program!

Did you get a letter or email from the Premier, Housing Minister or you local MP which you thought didn’t address your concerns about tenant advice funding cuts?We’re asking you to write back again challenging some of the trite statements.  And because we know you’re busy, we’ve put together a few dot points which might help you. Click here to see. 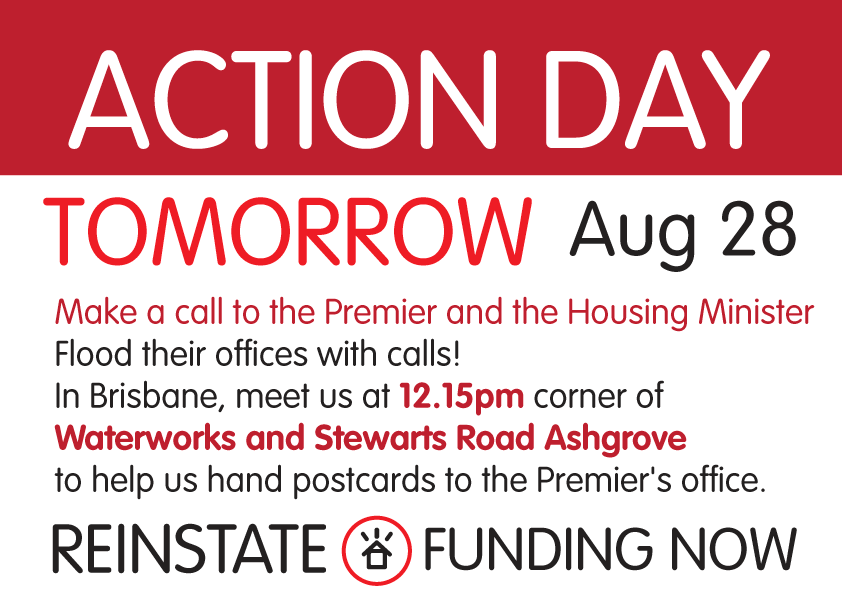 Sarah Addo must be wondering where she would have gone for assistance if  her tenancy problems occurred after October 31 this year.  That’s the date when the TU’s North Queensland (TUNQ) office will be shut along with all other tenant advice services across the state unless the Queensland government reverses its decision to cut funding.