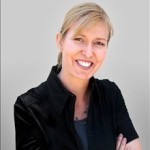 In an interview with ABC local radio Southern Queensland the Tenants’ Union puts a strong argument about why tenants need and deserve access to independent advice services. We found this audio link on the TUQ website with the following correction:

“When Penny said there were 57 hours of advocacy in the last full year of funding, she meant to say 24,000 hours“.

Sue Abel who works at the Tenants’ Union’s office in Roma talks on local radio about social housing stock transfers and funding dilemmas. Listen to the audio here.

Nearly every product on the market has to meet a set of standards, from food to cars to computers.
A Victorian Greens MP, Greg Barber, believes basic standards should also apply to people’s homes in the private rental sector.  He has proposed legislation for Victoria to establish these standards.
The standards would cover things like structural integrity. The standards might include an electrical safety switch, windows with glass in them, locks, running water, a stove and a sink, protection from damp and its effects.  What do you think?  At a time when private rental properties don’t have to meet basic standards, is it appropriate for the Government to strip funding from tenant advice services?  Who will help tenants exercise their rights to get basic maintenance and repairs done?

Have a look at Greg Barber’s proposal here.

Across Australia, more people are renting in the private rental sector than previously, in fact there are twice as many renters today than there were in 1981.  And they are renting long term, no longer is private rental a transitional tenure to home ownership.  But renters in Australia have fewer tenancy rights than renters in Europe.

Contact your MP, write to the Premier demand our services back!

See – With more people renting than 30 years ago, change is needed to protect tenants’ rights.

From the Capricorn Coast Mirror 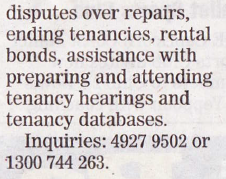 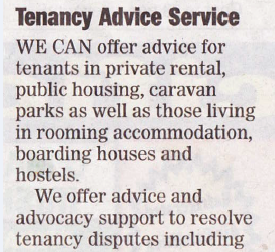 TENANTS Union Queensland Fraser Coast is reminding people in the region its advice service remains open and available despite funding complications across the past 14 months.

“TUQ Fraser Coast continues to deliver free and specialised tenancy advice both face-to-face and by the telephone to tenants in our community,” TUQ spokeswoman Ros Connor said.

“While funding is still only secured until the end of December, we are very pleased that these much-needed services are still available to local tenants.”

In the past two months TUQ Fraser Coast has helped 188 tenants. 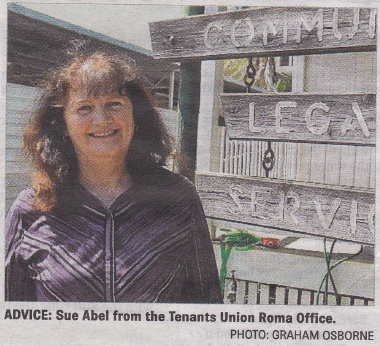 Reprinted from the Financial Review 7-9-13 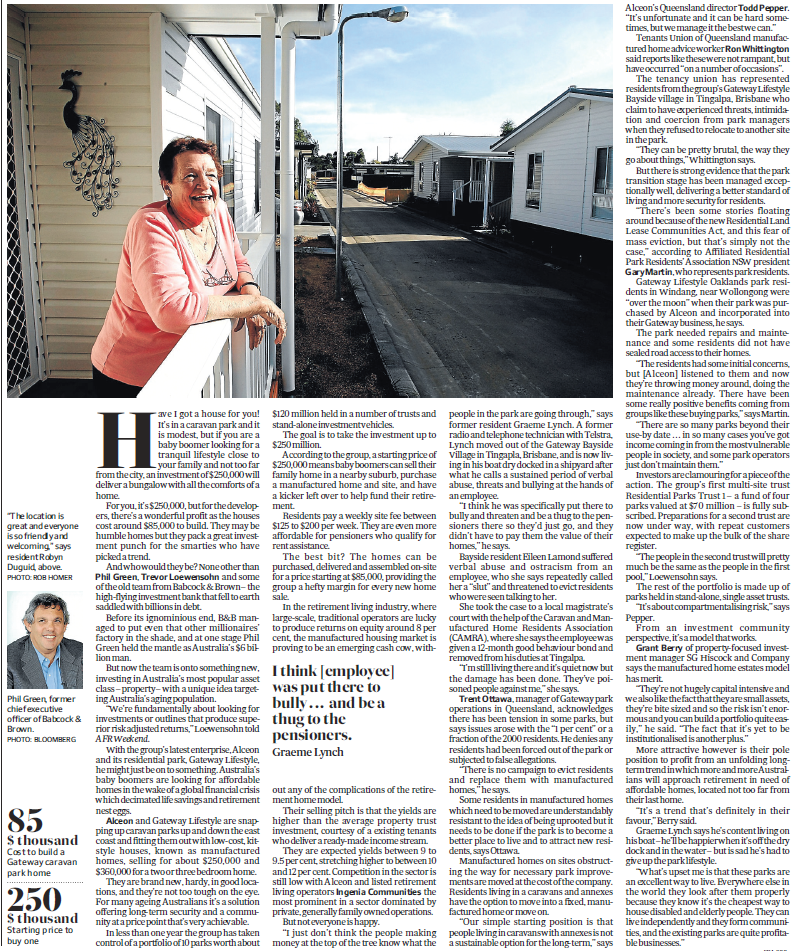 Despite results from the ABC fact checker, rent is expensive……

“Rents across the country have doubled since the year 2000, but in the ACT, Queensland and WA they’ve actually tripled,” Senator Ludlam told the ABC’s The World Today program on August 28.

“It’s actually been a disaster for the third of Australian households that rent.”

Senator Ludlam made the statement after The Greens launched a policy document aimed at easing rental circumstances for Australia’s low income earners.

Photo: More than 120 tenants have been evicted from public housing since 2011.

Shelter WA is urging the Housing Minister Bill Marmion to abandon the policy of evicting tenants for minor disturbances such as excessive noise, minor property damage or domestic disputes.

More than 120 tenants have been evicted under the so-called ‘three-strikes’ policy since its introduction in 2011.

Shelter’s executive officer Chantal Roberts says councils can resolve noise disputes, but by threatening people living in public housing with eviction, tenants are being held to an unreasonable standard.

She says many of the complaints do not justify eviction.

“What our report is asking for is those minor criteria – such as children being overly noisy – to be removed, because they don’t exist in the private sector,” she said. END_OF_DOCUMENT_TOKEN_TO_BE_REPLACED

Reprinted from Perthnow – read directly from their site here.

TENANTS are being offered free TVs, iPads, gift vouchers and $2000 cash to rent in Mackay as the effects of mining jobs losses hit the economy.

The city that is the gateway to the Bowen Basin once had one of the tightest rental markets in Queensland, with people forced to live in dongas and garages.

But it now has the highest vacancy rate, with landlords forced to slash rents by up to $100 and offer enticing deals.

One agency has been offering $2000 or $1000 towards the cost of moving (but the money can be spent on anything) plus two weeks’ free rent.

Another advertised a free iPad or 81cm flatscreen TV for a limited period while another was giving away $500 Coles-Meyer vouchers.

Many new four-bedroom, brick-and-tile houses are advertised with one or two weeks’ free rent or promoting the fact that ”We are doing deals”. END_OF_DOCUMENT_TOKEN_TO_BE_REPLACED

This is a long, well written piece (see link below) not directly about tenants or tenants’ rights. It’s a piece about a mine encroaching on a small town and a legal case to stop it coming closer.

However, during the court case, proponents argued that the town would not be gutted by the mine having to buy up the houses in the noise zone because they could tenant the properties. To quote the article,

“The judge began pressing an uncomfortable point; why was it acceptable for mine-worker tenants to be put into houses deemed too exposed to noise for their original owners to live in?”

If you want to go straight to the section on tenants, see Chapter 4, starting the 7th paragraph. There is a very interesting interchange between the Judge and the Government Barrister. The interchange touches on an issue that many tenants and their supporters will be familiar with – the trade off many households are forced to make between maintaining affordable rent costs and accepting conditions which do not meet community standards. The last paragraph in this section quoting the Judge is well worth reading!   Read the article from the Global Mail here.

News from Holdfast Bay, South Australia and reprinted from news.com.au – we think this might be a story to watch!  Read directly from here.

Sen Xenophon also plans to arrange for one of Australia’s leading voices on social justice, Tim Costello, to headline a public meeting later this month to help raise money for a residents’ fighting fund.

“I’ve retained the services of a legal counsel to give advice to the residents,” Sen Xenophon told the Guardian Messenger.

“A legal team is being assembled to represent the residents, with a view to have legal proceedings issued on their behalf against the council.”

He said he had been advised by a barrister that the residents could pursue a civil action in the District Court.Senator Xenophon said residents had produced evidence that led them to believe permanent tenants would always be accommodated at the park despite them signing yearly leases. Those representations encouraged tenants to invest their entire savings, in some cases up to $120,000, to purchase homes at the park and make improvements, he said.

The council is planning a $3 million revamp of the seafront park, adding up to 20 cabins, 12 eco-style tents, a leisure area and an upgraded kiosk. The redevelopment plan includes new up-market cabins on the site where the residents live. END_OF_DOCUMENT_TOKEN_TO_BE_REPLACED 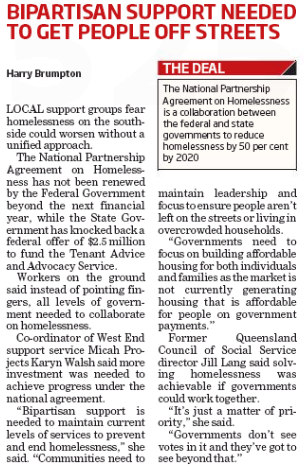 New South Wales public housing tenants with extra bedrooms will soon be penalised with a weekly tax if they refuse to move into smaller accommodation.

From September, around 17,000 people living in public houses with extra bedrooms will be slugged with a spare bed tax if they refuse to move into smaller properties.

Singles will be charged an extra $20 per week and couples an extra $30 per week.

“We have tens of thousands of families on the public housing waiting list with nowhere to live, people living in the backs of their cars with their kids, we need to get those people into public housing.”

It follows a similar policy adopted in the United Kingdom in April where public housing tenants have their benefits incrementally cut for each spare bedroom.