Reprinted from the Nation of Change 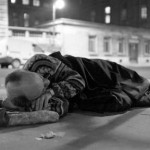 Earlier this month, Hawaii State representative Tom Bower (D) began walking the streets of his Waikiki district with a sledgehammer, and smashing shopping carts used by homeless people. “Disgusted” by the city’s chronic homelessness problem, Bower decided to take matters into his own hands — literally. He also took to rousing homeless people if he saw them sleeping at bus stops during the day.